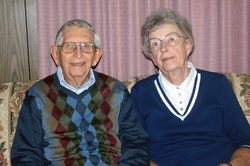 In 2008, they agreed to be co-chairs of the fundraising committee to secure a permanent home for the Ames Historical Society. They organized mass mailings and managed the donor list. Willie wrote thank-you notes to each donor. They personally talked to the majority prospective donors and led building tours. Because of their outstanding effort, nearly $400,000 was raised in 2008, a year of declining state and national economic conditions. This allowed the purchase of the building in December 2008. They continue their leadership and raise funds for the endowment and ongoing operating expenses.

Willie and Rollie have been involved in the growth and development of the ISU College for Seniors, now OLLI. Rollie served as Board Chair and was involved in obtaining a $1 million grant for OLLI. They are long-time members of Memorial Lutheran Church where they provide leadership and support, making stewardship calls and aiding in fundraising efforts for an office addition and organ repair in addition to ongoing financial support. 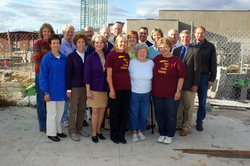 Through the efforts of Greg Madsen and Laurie Henry, co-chairs, this committee raised over $4.1 million for the construction of a 600-seat auditorium for the Nevada Community School District. The Josephine Tope Trust pledged $2 million (dollar for dollar match) to get the auditorium project started. The time and effort of the individuals involved in this project was tremendous. The number of campaign meetings and presentations made numbered in the hundreds. Numerous fundraising activities took place including working for the Iowa State Dining Service, holding a magic show and conducting a silent auction. The group engaged over 70 individuals in setting up and implementing this campaign. Because of their enthusiasm, other organizations jumped in to help raise funds. They were successful in raising the matching funds in just over a year, and a groundbreaking ceremony took place in July. The community will enjoy a facility that will not only show case the talents of the Nevada Community School District young people, but be used by community residents for years to come. 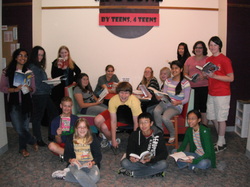 The Ames Public Library Teen Advisory Group (TAG) is an enthusiastic, committed and diverse group of youth from sixth through twelfth grades. Co-presidents Divya Navi and Tripti Upreti, both of whom are entering their senior years in high school, lead the group. Currently there are 28 active members. TAG identifies fundraising needs in the library and determines the best fundraising route. Since 2007, TAG has identified the Project Smyles program, focused on increasing early literacy in children ages 0-6, as a great library need. Members raised $1,326 last fiscal year to support this project, contributing over a hundred hours preparing for and participating in fundraising activities.

TAG members identify projects each year that benefit teens and the library. They share ideas and input and through fundraising provide support to teen programming. Over the last two years, they have raised funds to purchase two Wii gaming systems for use in the Library. Members volunteer their time in support of the current building expansion project and for the Library bi-annual book sales.

Through their outside fundraising efforts, volunteer time and input at Teen Advisory Group meetings and Ames Public Library Friends Foundation meetings, members of TAG are contributing to the overall success of the library and Ames community. 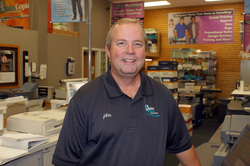 Alpha Copies & Print Center opened in 2005 and quickly established itself as a business that actively supports the community and provides exceptional customer service. Alpha Copies donates an average of $25,000 in printing and cash each year to an extensive list of non-profits and other causes.

The Ames Chamber named John Crawford and Alpha Copies & Print Center Entrepreneur of the Year in 2010. John was cited for his support of needs and causes in the community and around the world. He always goes the extra mile to serve his customers. He donates extensive amounts of printing services to churches and other ministries, a long list of schools, clubs, as well as numerous non-profits.

The philosophy of Alpha Copies & Print Center is that if they can offer services free or at a discount, organizations can save money that can be used to carry out their important mission. 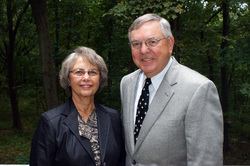 Carolyn is passionate about children and learning. She served on the Ames School Board for 15 years, advocated for every child learning at high levels and helped establish the Ames School District Education Foundation. She helped found the Ames Baby Talk coalition which became Raising Readers in Story County. As a board member, she leads the fundraising team and writes grants for literacy projects. Carolyn also helped found United Way of Story County’s "Women with Initiative" program.

Chuck and Carolyn feel strongly that reading is essential for lifelong learning. They contribute financially to Raising Readers by giving to the November Annual Appeal funding current needs and to the Raising Readers Endowment Fund for long-term sustainability. In 2008, they established the Jons Family Fund Endowment as another way to leave a legacy and continue to support literacy long into the future.