Please help The Story County Alliance for Philanthropy and the citizens of Story County recognize the following people and groups and their philanthropic contributions.

​When we think about compassionate and caring people who support our community, Northcrest Community Residents are top of the list. These generous residents regularly invest in Story County by contributing their financial support, energy, time, and service in a variety of ways.
​
Each year, Northcrest Community Residents are invited to identify non-profit organizations in the community they know are doing important work. With the help and leadership of the Resident’s Council, one organization is selected. The selection process is lively and extensive as many nominations are submitted annually. Over the past six years, collective gifts have totaled $194,130. As a result, six worthy organizations have benefitted from their generosity.
​
Individually, Northcrest Community Residents also financially support many additional non-profit organizations as well.

Since locating in Ames in 2012, Ames Ford Lincoln and the Johnson family have made an immediate and lasting impact throughout Story County.  Their commitment to the community of Ames goes beyond their desire to have satisfied customers.  They are committed to being good neighbors and benefactors.  They give credit to their customers, stating that without them they understand their ability to give back to the community in so many different ways would not be possible.
Their philanthropic contributions are considerable throughout Story County, including United Way of Story County and the Wheels for Work program, Boys & Girls Clubs of Story County, Mary Greeley Foundation, Ames Chamber of Commerce and the Ames Chamber Steak Fry, InterCity Trip, Leadership Ames, LIVE UNITED, Ames Foundation, Ames Main Street Farmers’ Market, Ames Public Library, Iowa State University, Able Up Iowa Foundation, Story County Medical Center, Friendship Ark, ACPC, and Ames Municipal Airport Terminal Project.
Through their generosity and genuineness, the impact of Ames Ford Lincoln and the Johnson family can be felt throughout our county.

The SHOP (Students Helping Our Peers) Food Pantry was created in 2011 by a group of students from the Food Science and Human Nutrition learning community.  The intent was to help combat food insecurity among their peers.  The mission of SHOP is to “engage with anti-hunger advocates and serve the student population by increasing hunger awareness and food security.”  SHOP Food Pantry accomplishes this mission by providing free, non-perishable food and personal care items for ISU students.
​
In 2020, SHOP was serving upwards of 50 students per week with the help of nearly 200 student and staff volunteers.  SHOPS operations are supported by both financial donations and direct food donations from many entities throughout Story County.  In 2020, they raised nearly $25,000 in their efforts to combat food insecurity on ISU’s campus.  The SHOP Food Pantry volunteers exemplify the attributes of the Outstanding Youth in Philanthropy and are very deserving of this honor.

Since 2017, Lyndsey Fennelly and Betsy Waite have partnered with Iowa State University Men’s Basketball alum and current Philadelphia 76ers Georges Niang to plan, market, execute and host the annual Georges Niang Golf Outing which benefits local nonprofit organizations. This full day event has raised tens of thousands of dollars to support mental health services at Mary Greeley Medical Center; the building of a home for Habitat for Humanity; a new van to transport youth to appointments and wellness activities for Youth and Shelter Services; and programs, services and homes for Friendship Ark.
Organizing and hosting an all-day event for 150 people is a major undertaking. It involves recruiting about 125 golfers, recruiting volunteers, securing silent and live auction items, prizes, games at each hole, a celebrity auction, sponsorships, food, and special guests.
Georges, Lyndsey and Betsy not only give of their time and expertise to raise funds for the designated nonprofits, they contribute personally to them as well. They truly care about the mission and impact of each organization and the Ames community

​Sarah and Ben Buck are committed to improving lives and making Story County a better place for those less fortunate or who need a helping hand. For decades, they have provided financial support and dedicated service to more than a dozen nonprofit organizations that align with their strong values.

Among those most impacted by their generosity are the Mary Greeley Foundation, Friendship Ark, Ames Miracle Park and Field (in conjunction with the Rotary Club of Ames), Mid-Iowa Community Action – MICA, St. Andrew’s Lutheran Church, Rotary Foundation, and United Way of Story County. Sarah and Ben also provide annual support to many more organizations and serve in volunteer leadership roles that make an impact and inspire others to give. They have made transformational contributions to our community.
Because of the Buck’s compassion, planning and foresight, their support will continue well after their lifetime. They have generously endowed two education funds through the Mary Greeley Foundation, a scholarship that is awarded annually to a student pursuing a degree in healthcare and an award to provide tuition assistance to employees. Both will continue in perpetuity. They endowed a third scholarship for students at Luther Seminary, St. Paul. As members of the Greeley Society, they will also provide future support to their education funds and the medical center through an estate gift.

Sarah and Ben Buck have dedicated their lives to quietly serving others and are true philanthropists in every sense of the word. They make every effort to promote love of humankind and exemplify what we could use more of in this world. 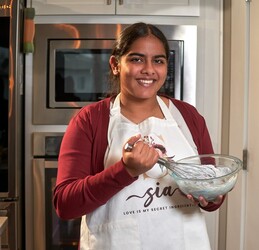 Rising Star  Philanthropist
Nominated by Able Up Iowa
Sia is a 12-year-old who resides with her parents and younger sister in Ames.  Sia is often called a “kind soul” by her friends, teachers, and family members.  Sia’s traits of empathy and her giving nature were visible from a very young age.

Sia was nominated because she was able to successfully mobilize citizens in Story County to act at the local level.  Sia, with the help of her family, created a Jars of Hope fundraising campaign selling over 500 cheesecake jars and donating the proceeds to help alleviate the suffering caused by a second wave of COVID-19 in India.  When asked what keeps her motivated for philanthropic work, Sia responded quoting Aesop, because “no act of kindness, no matter how small, is ever wasted.”
​
Sia is not only a role model for her peers, but for everyone in Story County, which is why she was selected as the Story County Alliance for Philanthropy’s Rising Star Award. We are confident this extraordinary young woman will continue to pursue her philanthropic passion well into the future.